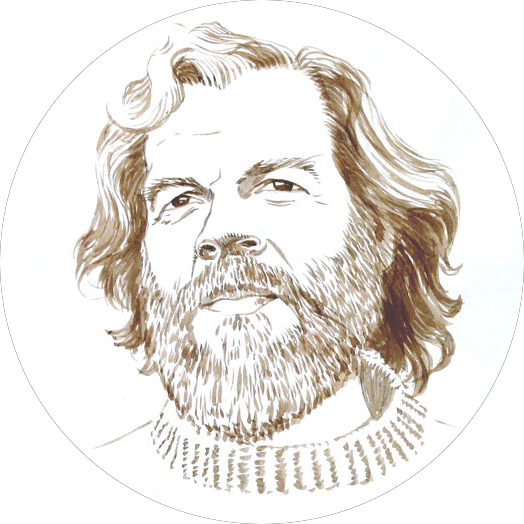 Seeing Values Within Colors is Important

In this exercise the colors are seen only as lights and darks (or values). This painting will teach you to paint more complex forms than the previous exercise and it will teach you to see a color's value. Print out the source photo or create a colorful still life of your own to paint from.

Value is the relative lightness or darkness of a color.

Because we create form by first dividing a color into it's light, middle and dark values it is important to recognize each color's values.

The value scale is placed over the questioned color.

You then determine which value it isn't. Clearly the value of the blue is not # 9 or # 1. It's not #'s 8,7 or 6 because the blue is darker than these. The true value of a color will be between too light and too dark on the value scale. The blue is lighter than #2 and darker than # 4. Its value is #3.

With these things in mind we will paint this subject. Using only black and white mix several values of gray on your palette. 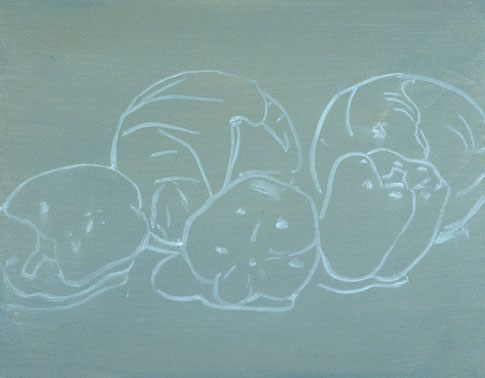 The drawing is made with thinned white paint on a toned canvas (See Canvas). White is used because it will create the least contamination of subsequent colors. The drawing should remain simple because a complex drawing would soon be painted over and lost.

The pure white patches are the highlights. They are put in first here to keep them as clean as possible. The highlight on a shiny object is a distorted picture of its light source. The light value for this pepper is placed around the highlight and wherever else the light value appears.

Next the darks are placed. 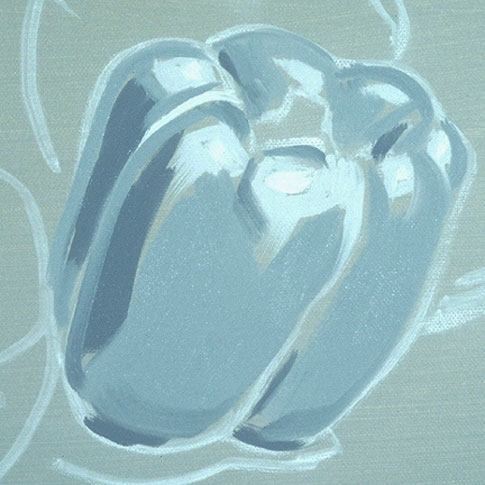 If it's not the light and not the dark it's the middle value. 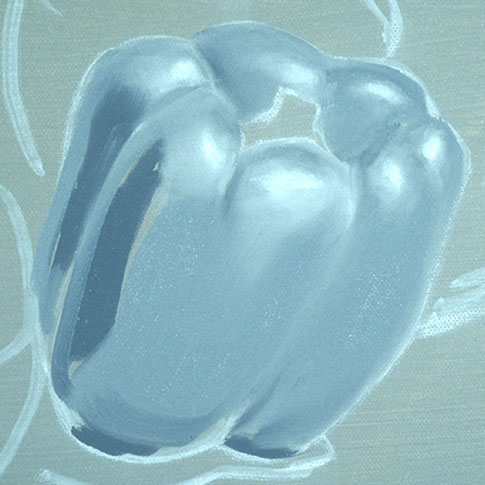 The middle and light values are blended with a Flat brush.

The pepper is blended using parallel and curved strokes with Flat bristle and Flat sable brushes. 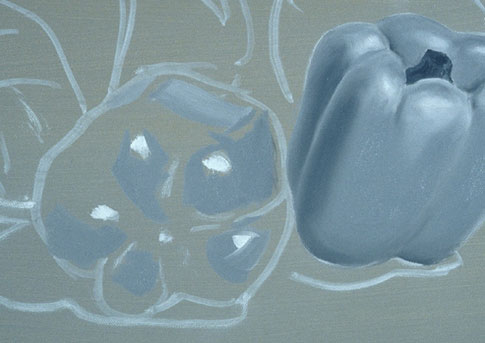 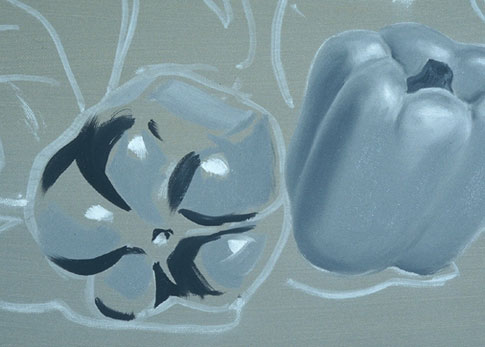 The darks are put in. They are darker than the darkest darks of the first pepper.

The middle values are put in wherever the lights and darks are not. A Flat bristle brush one inch wide was used. 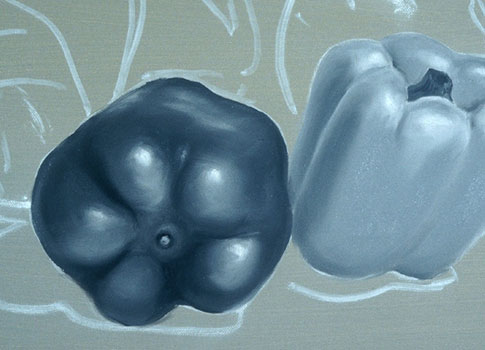 The blends are mostly made with curved brushstrokes using a Sable Flat.

The right hand pepper is a value between the first two. Each of these peppers has its own set of three values. 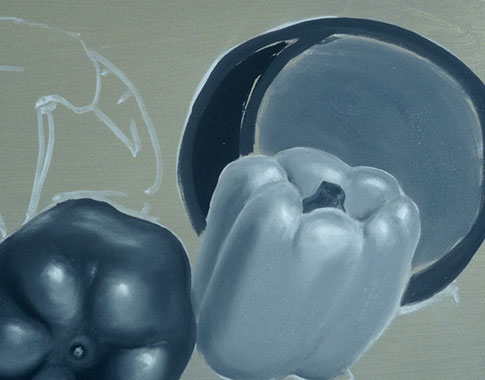 The cabbage is begun. Its value shapes establish the form first.

The cabbage is loosely blended to strengthen the illusion of three-dimension. 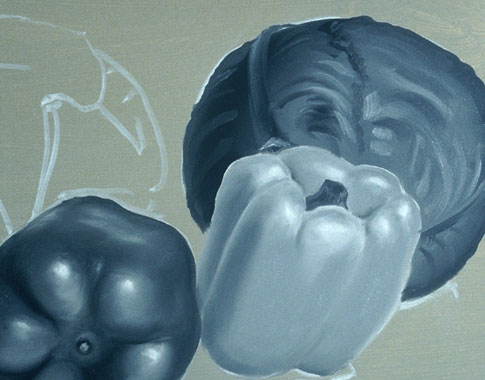 The texture of the cabbage leaves is then established working wet paint into wet paint. This is one of the advantages of a slow drying paint. 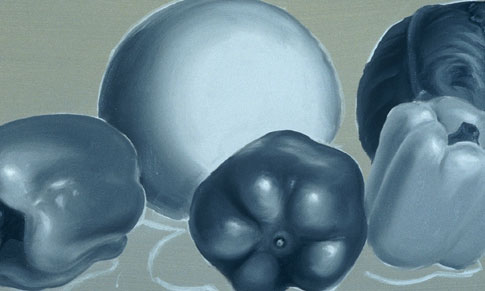 The other cabbage is a different set of three values but it has the same form. 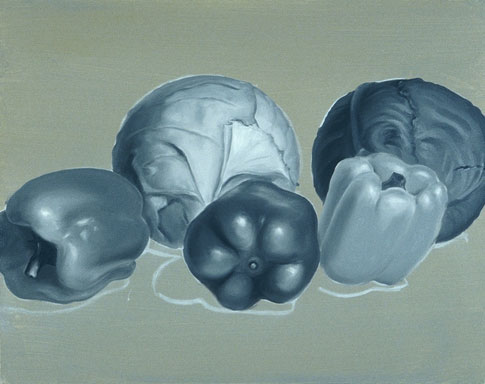 The texture is applied to the second cabbage using wet paint into wet paint. 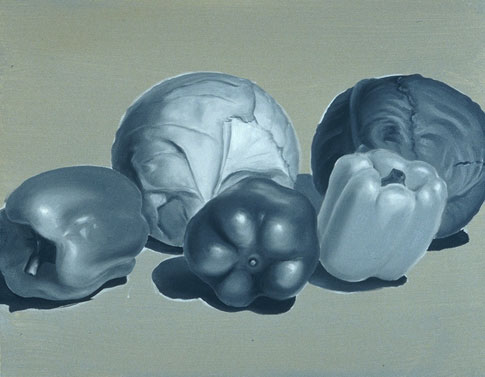 Cast shadows are the absence of light so their values are dependent on the surface value and the strength of the light. Bright light makes dark shadows.

The background cleans up the edges.

Thus you have seen the importance of the values within the colors and how they alone create the illusion of form. Plus you have used the paint in new ways. 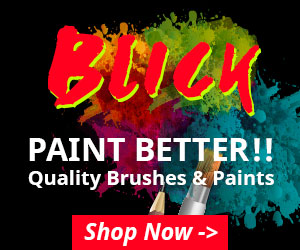 End of Advertisers & Affiliates Section. Thanks for your support.